I just got my Onlykey DUO and when using the app (v5.3.5) with the DUO, the slots do not show the name that was saved for the slot. I saved it. I saw the name there and a little later when I go back to the app, the slots all show “default” with no indication as to what slot is what. After unplugging and re-plugging multiple times, the slots showed up with the names again, but again they went back to “default” when I looked at the app a few minutes later.

@jer Can you let me know what operating system you are using the app on? Also when you say the slots show “default” do you mean they show empty like this: 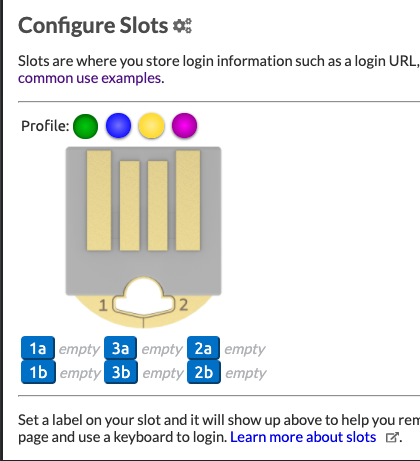 Or do they say something other than “empty” as the slot labels?

As mentioned in another thread, I have the same problem. They say empty. Mac OS 12.3 on M1, using the standalone app. Actually setting up a different slot will let those other slots be shown again - until you unplug the key or close the app. Sometimes for me it is not all slots which show empty, but only some of them. Switching in the app between the colors will not fix it.

Also just checked with the OnlyKey Color, this is not happening, same app, some OS.

Correct, it shows empty as in your picture.

Same problem here with Windows 11. If I close app after unblocking Onlykey by entering PIN and reopen it, all slots labels are always shown. I think that app tries to read labels prior to unblock Onlykey and then shows blanks. It could be just a matter of refreshing labels after entering PIN.

@edu @p0lt This should be fixed in the latest app release, please try this and let me know if it addresses the issue - Release OnlyKey App v5.3.6 · trustcrypto/OnlyKey-App · GitHub

I’ve installed and it does appear handled now. Thank you!

yes it is working correctly now